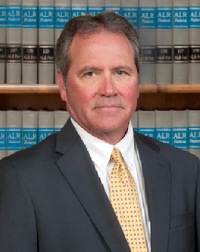 In January of 1977, Mr. Robinson began practicing law with the firm of Coleman, Gantt, Ramsay & Cox.  For the past forty-two years, he has practiced law in Pine Bluff and is of counsel with the law firm of Ramsay, Bridgforth, Robinson and Raley LLP.

Mr. Robinson’s practice is concentrated in the area of labor relations.  His practice includes representing clients before the National Labor Relations Board, conducting training for compliance with a broad range of labor relations laws, representation of clients in the federal and state courts concerning labor matters, and representing clients before the Equal Employment Opportunity Commission, Labor Department and other governmental entities.

Mr. Robinson is a member of the Arkansas and Jefferson County Bar Associations (President 2008).  He is a member of the Labor Section of the Arkansas Bar Association.  He is licensed to practice in all of the courts in Arkansas, including state and federal courts, the Eight Circuit Court of Appeals, the Fifth Circuit Court of Appeals, the United States Supreme Court, and is listed in 1993-current editions of The Best Lawyers in America for Labor and Employment Law, various editions of Chambers USA Leading Business Lawyers, and the 2008-current Mid-South Super Lawyers in the field of Labor Law.  Formerly, he served on the Board of Directors of the Arkansas Bar Foundation and the Arkansas State Board of Law Examiners (2006 – 2011, Chairman 2011).